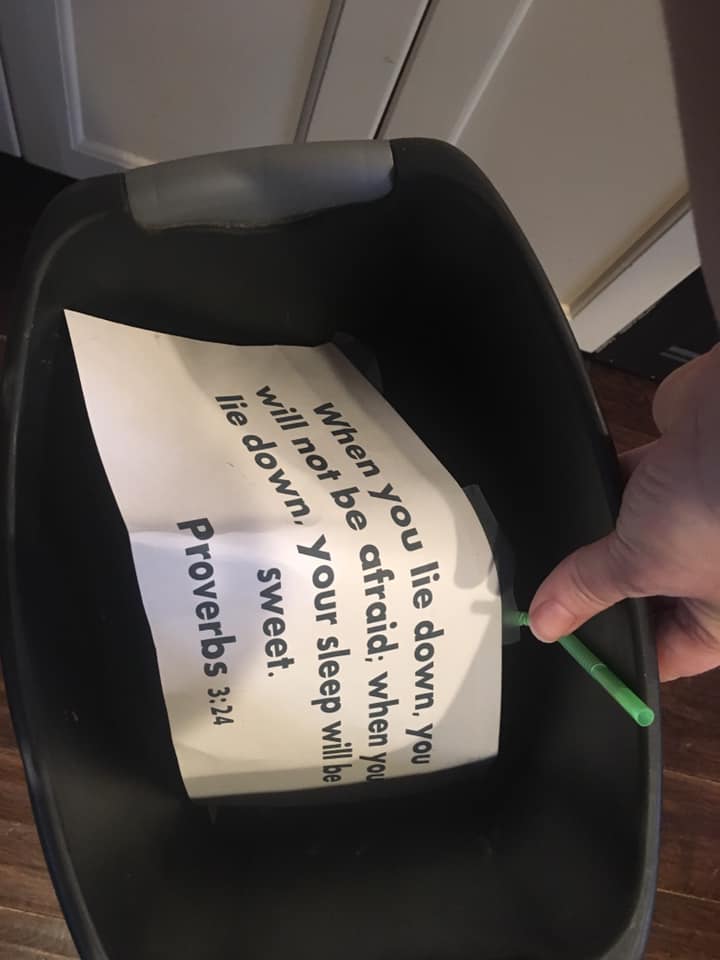 The Bedtime Prayer of Desperation

How breakthroughs in bad dreams came to our home

This week called for a spring cleaning of the boys’ room. The kind where you pull the beds and dressers away from the wall and bust out the crevice tool that came with the vacuum.

It felt so good.

The sun was shining through the window, the kids were playing or doing chores nearby, and I was going to town, sweating from sucking up months of dirt, dust, a couple black socks and a few spare pennies.

I pulled the bed out a little farther and a piece of paper caught my eye. I pulled it out from between the trundle drawer and the wall, opening it so I could read it. Before I even finished smoothing it, my heart thudded to a stop as I remembered the font.

When foster buddy first came (15 months ago now!!!!!) he did not know how to sleep at night. He was petrified. Not only had he been taken from the only life he had known and then all of his siblings too, but the life he had before he came only added to his nightmares.

He could not sleep through the night. That meant we could not sleep through the night. Sometimes, he would come get me 3-4 times in one night, pale and shaking from his dreams. He would also sleepwalk in between, never remembering anything the next day. If I didn’t tuck him into bed that night, he would come and find me at 2am every time just to know I was home. It wasn’t long before we were the ones who felt like we were living in a nightmare.

Doctors appointments are difficult to make quickly and when you’re losing your mind from lack of sleep there is not much that can help at that point. We were desperate.

One day, I found the verse in Proverbs that read, “When you lie down, you will not be afraid; when you lie down, your sleep will be sweet.” I printed it out and even though little buddy couldn’t even read yet, we taped that sucker to the top of his bed and read it out loud every night as we tucked him in. We laid hands on him and prayed over his mind, his heart, his will and his emotions.

A few more bumps in the road and we found the magical melatonin that got him sleeping through the night. Things got better, slowly but surely. Sometimes it was two steps forward, ten steps back. One night in a tough tantrum, little buddy ripped off the paper and it must’ve fallen behind his bed.

I never noticed at the time. He mentioned it once in a blue moon as I tucked him in, but I assumed the boys had ruined it in play and it had long since hit the landfill. I prayed a patched up prayer of sleeping through the night, but I was no longer begging God for that: I was thanking Him for how far we had come.

Until I saw that paper.

All the feelings came rushing back through me, and I remembered the exhaustion, the sadness, the deep grief of walking a child back to bed night after night, the desperation of seeking God in this seemingly forsaken place of loneliness. I even remembered how my legs ached, my hips feeling hollow in my bones for climbing stairs every few hours when I should have been sleeping.

I shook my head in awe and amazement.

In my moment of flashbacks, something else was breaking through: it was the song of a beautiful, happy six year old as he snuggled our family cat and swept the bathroom floor before playing Legos outside his room. The song got louder and my memory faded softer.

It was a memory that I knew we were never going back to. We had overcome our nightmares and our sleep was now sweet.

Outside of the random nighttime snafus that come with six children under my roof right now, I sleep through the night pretty much all the time.

Okay, often for that ratio, anyway.

I breathed out a sigh of relief as I said goodbye to that faithful promise: no longer needed on paper taped over the bed; now fully engraved on our hearts.

And I had a sweet singing six year old to prove it.

For more about our foster care journey, click here.

To dowload our Bible study on How to Fight Overwhelm with the Word of God (that includes another pretty printable of this verse!) click here. THINGS I LOVE FROM DOLLAR TREE